skip to main | skip to sidebar

While thinking about moving again (nomadic to the core), I heard myself saying about one possibility, "but it's too far away." So then I had to ask, "too far from what?" and realized that New York City is still my anchor point. I was born in the city, and though raised on Long Island, I always knew it was where I would go when I finished college. It is the only place where I have my bearings. I know north, south, east and west when I am on those streets. A trip to New York is always anticipated with excitement, and savored afterwards. This past week we went there, though most of the trip involved activities near the city rather than in the city. It's too much to share in one post, so I will begin here, and try to return in a timely manner to tell the rest.


We spent the first night overlooking the Hudson River in Rockland County with Pat Hickman and Gail Hovey. Their home is full of textiles, ethnographic and contemporary. It confirms a kinship I feel with them and with their curiosity and creativity. Their move from Hawaii to here has brought them back into the thick of a cultural pulse that I long for. Before finding their house, they found Pat's studio, which we visited the next morning. Gail has dedicated writing space in their home. Clearly they have their priorities right.


Pat's studio is in an old calico mill, now called the Garner Arts Center (GAGA). In the short time we were there we met several other artists who have space in the buildings. Steph Gorin, owner of Loop, is just down the hall from Pat. She was just back from the Maryland Sheep and Wool festival where she was selling her fiber and yarn. (Someday I am going to make it to that event.) She has a wonderful smile and enthusiasm for what she does, and allowed me to photograph her equipment. As an owner of a high tech loom (my beloved TC-1), I could really appreciate her equipment and the unique yarns she creates for others to use. (By the way, did you know the TC-2 is launched and that Vibeke Vestby will be bringing them to Convergence this July?) We also met Eric David Laxman, a sculptor whose studio was badly damaged from Hurricane Irene. He was actually clearing it out for a move to a new home studio, but he still has a gallery at GAGA. We were also introduced to several other artists, and left appreciating the support community gives to each other, and at the same time what dedicated studio space opens up for creative work.


When I was a student in the late 1970s, the collaborative baskets of Pat Hickman and Lillian Elliot were very prominent in the fiber world. I think it is one of the great things about this field that people have always been approachable and friendly. I'm not embarrassed to say that I feel awe when I realize that I have become friends with Pat; that she and Gail welcomed us to their home and the conversations reminded me of why I am a weaver and how much I love textiles (some of them). We all have changed over the years, just as the field has changed, and I certainly see textiles being used by artists everywhere--but the identity with this material is not the same today as it used to be. We have changed too, but there is some fundamental devotion to the lineage of textiles that is essential for me--and I am glad to find this devotion alive and well in Pat, even though fiber is too narrow a definition to describe her work. She gave me a copy of the National Basketry Organization (NBO) Quarterly Journal with an excellent article on her work written by Catharine K. Hunter. The image above shows the magazine article, with one of my favorite sculptures by her, Garlic.


In the fall when I went to NYC, I also intended to do several posts about the trip, and instead I only did one, and then stopped posting for months and months. This time I promise to continue in a day or two.
Posted by Bhakti Ziek at 8:32 PM

Detail of the Month 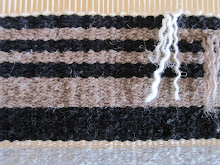 If you hover over the image in the slideshow above, you will get a control bar which allows you to pause an image, go forward or backwards.
If you click on an image in the slideshow, it will take you to a new full-screen window. There you can scroll through the images at your leisure (white ground) or click on the top slideshow button and see the weavings on a black ground. There are captions in both that give you information about each work.
If you are interested in purchasing one of my weavings, please email me for details

All images and content copyright Bhakti Ziek unless otherwise noted.